Fuck off to North Korea, you democracy-hating clowns.

Eric Allen Bell
REGRESSIVE LEFTIES: Your hatred, violence, entitlement and ignorance are why Donald Trump won. Rioting to reverse the outcome of Democratic elections, is just the type of moronic thinking that our Constitution is in place to protect us from. Sure, you are unique, just like everyone. And all you delicate little snowflakes will end up on history’s blooper reel. The pendulum has swung the other way, at last. The cultural mess you have made of this country – radical feminism, white guilt, the envy class living off the hard work of others, safe spaces, political correctness, generations of emasculated men, illegal aliens, Islamo-enthusiasm – this will all be cleaned up, as we drain the swamp and make America great again.

This pretty much summarizes how Obama and most liberals view the US military.
Harold was a bright child. He grew up in America. He went to school and had a bright future ahead of him.
Harold was full of life but was cut short in a violent moment. While few people had ever heard of Harold before his death, many did afterward. And in death, something very shocking happened. What was so shocking, especially when it is compared to the death of someone else recently in the news

On Aug. 5, 2014, Major General Greene was killed by a Taliban terrorist. He was returned to America with full military honors.

While Major General Greene was buried, Barack Obama was golfing. The vice president wasn’t there either. Neither was the secretary of defense. Flags were not even lowered to half-staff.

Four days after Harold Greene gave his life for America, Michael Brown was killed in Ferguson, Missouri. Brown was at best a thug. In the minutes before his death, he committed a robbery at a local convenience store. According to other reports, Brown struck Officer Darren Wilson and shattered his orbital bone.
Obama sent a three-person delegation to Brown’s funeral! Obama would not attend the funeral of the highest ranking military officer killed in the line of duty since 9/11, yet he sent a delegation to the funeral of a thug.

When Margaret Thatcher, one of America’s staunchest allies and Ronald Reagan’s partner in bringing down Soviet communism, died, Obama  sent only a small low-level delegation to her funeral. The snub was not missed by the British.

When Chris Kyle, the most lethal American sniper in history was murdered, there was no expression of sympathy from the White House.
But when Whitney Houston (black) died from drug overdose, Obama ordered all flags be flown at half mast.

No wonder most “REAL” Americans hold Obama in such contempt, especially members of our Military.

And the only difference between Obama and Hillary is that she doesn’t play golf. 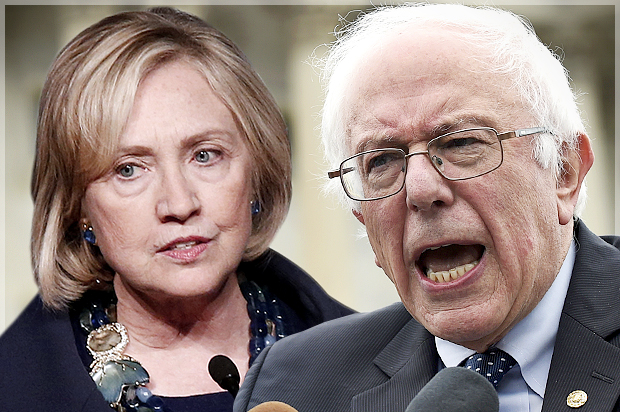 * “Black Lives Matter”; all lives don’t matter.
* College should be free and all student loans cancelled.
* All medical treatment should be free.
* To become an American citizen you just need to show up here.
* The economy sucks and after 7 years in office, it’s not Obama’s fault.
* The Middle Class is shrinking rapidly and after 7 years in office, it’s not Obama’s fault.
* Average family income is continuing to drop and after 7 years in office, it’s not Obama’s fault.
* Black youths have over a 45% unemployment rate and after 7 years in office it’s not Obama’s fault.
* Hispanic youth unemployment is over 35% and after 7 years in office, it’s not Obama’s fault.
* 50+/-% of the population is paying 100% of all the taxes and they are still not paying their “fair share.” The other 50% are not receiving nearly enough free stuff and deserve more.
* Everyone who votes Democrat will work less, make more money, get more time off, spend more time with family, pay less taxes, and get more government subsidies.
* Government wants even more money to squander on old promises already broken.
* Being a “Progressive” is a less cringe-worthy euphemism than saying you’re a Liberal.
* When America grows up, we want to be Norway, Sweden or the Netherlands .
* There’s a quagmire in Iraq and Obama’s complete retreat from there has nothing to do with the situation.
* Republicans want dirty air, oil spills, trash in the streets, polluted oceans, no medical treatment, young people without any education being paid the lowest possible wages, starving children, were responsible for Jim Crow Laws and don’t believe in equal rights.
* Snowden and General Petraeus broke laws for releasing and not securing secret documents but Hillary Clinton shares no responsibility for doing WORSE.
* If Hilary is elected, everything will be rainbows and Unicorns– just like with Obama.
* Hilary Clinton does walk on water.
* Cheaters do prosper.
* People often cheer stupidity.
* There is only one candidate given a voice in the Democrat Race.
* Hilary and Bill Clinton were born poor black children.
* All the qualifications needed to be president is to be a woman.
* Evil looks like anything white, rich, successful and productive.
* You will receive a participation trophy in life.
* Agreements of any kind should be signed and committed to, even if the other agreeing party doesn’t live up to its obligations.
* Everyone else does it, so we should too, regardless of any results in those other countries.
* Everything is still Bush’s fault. 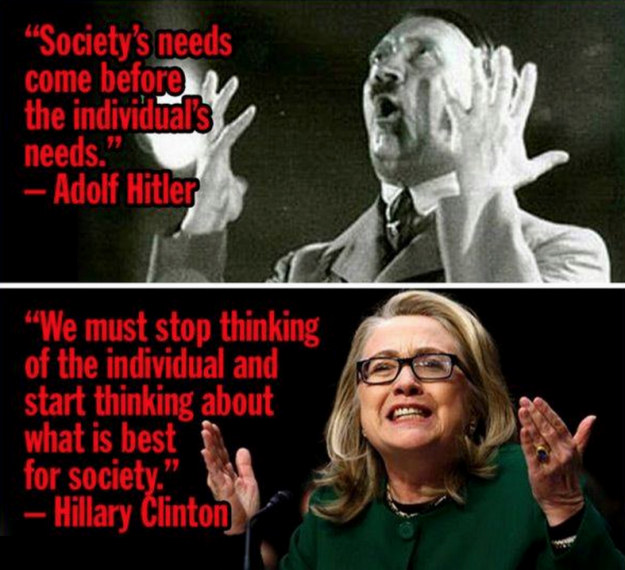 Adolf Hitler – “Society’s needs come before the individuals needs.”
Hillary Clinton – “We must stop thinking of the individual and start thinking about what is best for society”

Some strong words from Ted Nugent

Sister of Benghazi victim, Glen Doherty, is speaking out. Her disgust with Hillary’s unapologetic lying and lack of integrity with the whole heartbreaking situation has been hard to endure BUT what has broke her silence is Bill Clinton’s recent praise for his wife’s ‘heroic’ endurancethroughout the investigation… suggesting “it’s amazing what they put HER (Hillary) through” This poor Sister of our fallen hero…has had enough.

While Bill Clinton was amazed at what his wife was “put through” as she was grilled for hours by the Benghazi Select Committee, a Benghazi victim’s sister was equally amazed by his comment.

“The insensitivity of that comment is shocking. But clearly misguided sympathy runs in the family,” said Kate Quigley, sister of Benghazi victim Glen Doherty.

At a time when the family was “raw” with grief, Clinton chose to speak to them about feeling sorry for the Libyan people and maintained the narrative that a protest sparked the attack that left four Americans dead.

“Clearly, they have it all wrong,” Quigley said, adding that then-Secretary of State Clinton arrived that day with a script and an agenda. “It just blows my mind that she would choose to take that stance on that of all days.”

Quigley recalled the Libyan ambassador speaking to her, after the ceremony that same day, about finding the terrorists responsible for the attack. “I was speechless,” Quigley said, “because those were the words I had been longing and needing to hear…that should have come from Mrs. Clinton.”

“She’s had so many opportunities to just tell the truth,” Quigley said. “And had that happened from the beginning, Benghazi would be a distant memory.”

Watch the video interview, below.

What is absolutely heartbreaking is there is no sign of closure for the families of our Benghazi victims…not with the lies constantly suffocating the truth, and to expect anything other then lies from the Clintons, just seems absolutely impossible. Praying for the families of our Benghazi victims, that they may be comforted, despite Hillary’s lack of humanity for their great loss.

“I gave Hillary a hug and shook her hand. And she said, ‘We are going to have the filmmaker arrested who was responsible for the death of your son.’”