FACEBOOK REFUSES To Remove THIS RACIST PAGE Despite Numerous Reports!!

There is a Facebook page up and running called African American Defense League, which is a racist hate site BLATANTLY calling for the murder of white cops. Below are posts found on the page – the most recent being posted on November 30, 2015.

“Attn: All black police officers are encouraged to put in for leave of Absence. Every black person across this nation should find a white police to kill in every state and American/European province around the globe. Since our Black President, that you and I elected, will not protect us, let’s protect ourselves.” Mauricelm-Lei Millere – African American Defense, Farrakhan Justice League

My name is Dr. Mauricelm-Lei Millere. I am a national organizer working in Ferguson, Missouri in wake of Mike Brown assassination. I am working with local leaders in Ferguson, Missouri and other national leaders around the country. The $2.00 you donate to Go Funds will help to bail people out jail, provide food clothing, shelter, and a mission place for homeless communities helping us in this endeavor. Thank you in advance Dr. Mauricelm-Lei Millere, Clinical Psychotherapist, National (Organizer) – African American Defense League

http://www.gofundme.com/XXX    [fundraiser page redacted by me]

The racist, piece of shit that is calling for an army of murderers is  Dr. Mauricelm-Lei Millere.  His FB bio says this about him:
Mauricelm-Lei Miller was born on May 28, 1973 minister (Ethiopian Orthodox /Islam?),psychotherapist, poet, philosopher, Black Nationalist, Civil & Human Rights Leader.

This page has been reported by Facebook users over and over and Facebook REFUSES to remove it.  We all know that Facebook removes conservative sites and profiles regularly if you post ANYTHING negative about muslims or islam – instant DELETE & BAN.

Below are the messages people are receiving once Facebook ‘reviews the page’. 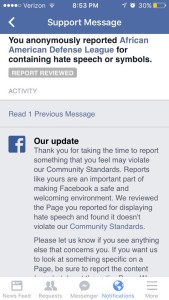 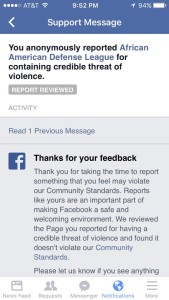 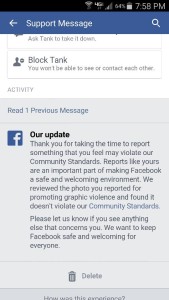